To the Shambhala Community –

The Interim Board (IB) is now in the process of closing on the purchase of Marpa House with a third-party buyer for $4.9 million USD. Although this has been a difficult decision, in what has been a challenging process for our community, we are writing today to offer further background information and the timeline of events, and to detail the alternative options that were explored.

Additionally, this letter will provide extensive details about the two offers we received, and provide context about our decision-making process.

On February 1, we released a Marpa House Memo which detailed the current financial situation of Shambhala Global Services, and outlined reasons for considering the sale of a Shambhala-owned asset, in this case Marpa House.

Those reasons are much the same today as outlined in the February memo:

The possibility of selling Marpa House was first seriously explored by the Kalapa Council in 2017 and 2018, although this exploration was never announced publicly. When the IB was seated, we were told that it would be inevitable, and both the past and current director of Marpa House had already been informed of this possibility. However, coming in with fresh eyes, we had hoped to find an alternative. Unfortunately, after several months of deep analysis, we came to the same conclusion.

In our deliberations on this decision and its consequences, we considered and sought advice on alternatives to the sale of an asset. In our Marpa House Memo from February 1, 2019, we requested community engagement in solving this problem, as well as proposals for alternative ways to address this.

Below are some of the alternatives we explored at the suggestion of the community, and our ultimate decisions on each alternative:

Due Diligence: From early in our tenure on the Interim Board through May 2019, we engaged in a process of due diligence to determine the reasonable market value and general marketability of Marpa House. This process included review of existing appraisals, zoning restrictions, and detailed conversations and interviews with prospective real estate agents. Based on these investigations, we determined that the property is worth between $4.5 – $5.5 million USD.

In late February, we met with a community group who was interested in making an offer on Marpa House to answer questions and provide support. This group is called the Community of Marpa House group (CoMH), and is made up of some residents of Marpa House and other members of the community. We gave them a window of four months’ protected time (from February to May 2019) to formulate an offer to purchase Marpa House before we would list the property on the market. In mid-May, the Marpa House Community Group submitted their proposal to the IB, which we reviewed with them in-person during our Board meetings in Boulder from May 15-19. During that same week, we received an unsolicited cash offer for Marpa House from a real estate developer.

The offer submitted by the CoMH Group was for a purchase price of $3 million, and was entirely contingent on raising the funds through donations, loans from the community, and traditional bank financing. They had what they described as “soft pledges” in the range of $500,000 to $750,000. These pledges represented verbal commitments, but no cash was available at that time. Additionally, they had no proof of funds nor a pre-approval statement from a bank for the residual debt required to finance a purchase at $3 million.

In our May conversations, the group was certain that the property was only worth $3 million and there was little we could do to convince them otherwise. Shortly after that meeting, the IB received the unsolicited all-cash offer for $5 million to close within 90 days with $500,000 in earnest money posted. The buyer further gave us proof of funds showing that he had the cash to cover the remaining $4.5 million. He offered Shambhala a leaseback provision of 90 days in order to transition out of the property in a way that allowed the current residents to have a generous notification period, with free rent for the months of September and October. This deal also did not have a broker’s fee, had no zoning contingency, could close quickly, and with all its components parts was worth the equivalent of $5.3 million, close to the upward range of the property’s value.

We considered both offers. This table compares the two offers mentioned above: 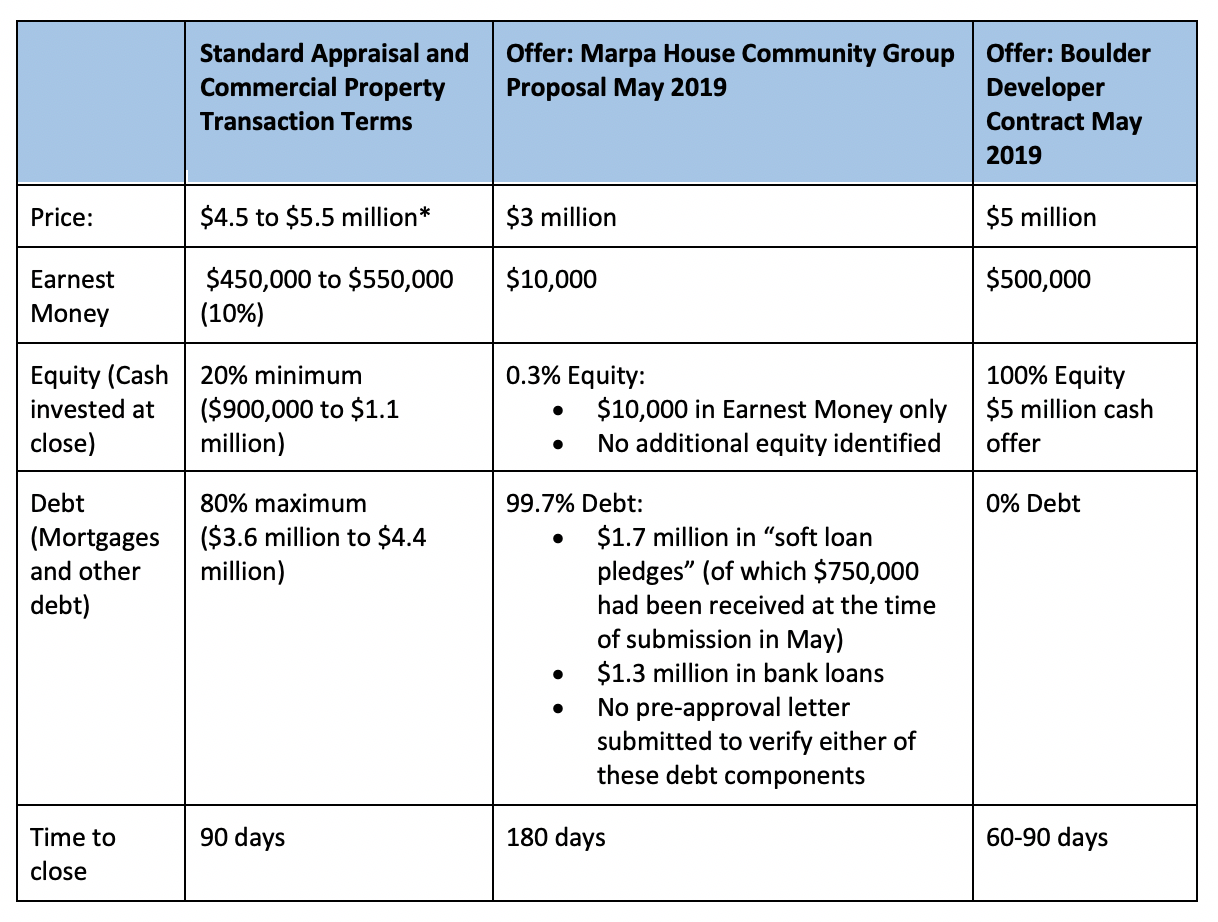 Since first receiving notice from the CoMH group of their intention to submit an offer, we have invested many hours answering questions to help them make an offer that could be viable for the whole community. We have also helped to run the numbers and create financial models. We offered them support through our International Development Officer to help them with fundraising.

We can see that they are passionate, dedicated and tenacious in their pursuit. We greatly appreciate their efforts, as we would have preferred to have a community buyer.

After a detailed review of both offers, the IB concluded that it would be fiscally irresponsible to accept a much lower offer based primarily on financing when we had a very viable all-cash offer at market price. As the Board, we hold a fiduciary and legal responsibility to the Shambhala organization and community. Selling the property for considerably less than market value at a time of great hardship would open the organization up to significant risk. A discount given to a small group in the community at the financial expense of the global Sangha would have been a breach in our fiduciary duty to manage this community asset.

We have been very forthright with the CoMH group informing them every step of the way of the status of the current contract and encouraging them to put in a backup offer, in case the $5 million cash offer fell through. At this point, we have closed the contingency period with the cash contract at a $4.9 million final sale price after the buyer presented structural and new landmark issues.

As of July 30th, we have not received a backup offer from CoMH although they have informed us that they do intend to submit one.

We will seek community input and discussion on the proceeds. In general, the use of the funds falls into four general categories:

Our present financial situation, which now requires the sale of an asset, has been not only precipitated by the current crisis but has also been building for many years. We will need to work together on the broader organizational issues of misconduct and leadership, all of which will require strong financial reserves as well as much heart and skillful means.

Although we did not participate in the financial practices of the last decade that have brought the organization to such a crisis, it would be easy to try to shift responsibility or blame to others. However, the sale of Marpa House is our decision and our responsibility. While painful and subject to debate, we have confidence that we have made the best possible decision for the community for the near and long term.

We know and accept that some in our community will never agree with this decision, but we hope that we can go forward with respect and appreciation for each other in the face of such difficulty. It is our hope that selling a valuable piece of our mandala will lead to the opportunity for strength and health, rather than further division.